The impact of assortment size on product purchase intention

As a rule it’s good to offer the consumer a wide choice, therefore wide assortment of the brand is often considered to be its advantage. Still the increase of the assortment doesn’t necessarily lead to the growth of consumer satisfaction or purchase intention.

The research conducted by Dartmouth College (Hannover, New Hampshire, USA) has shown how the increase of the choice negatively affects purchase intention of the product [1].

During the research the respondents were asked to rate pens using 10 pts. scale from 1 “Highly undesirable” to 10 “Highly desirable”. After the evaluation they were asked to purchase a pen having maximum rate. It turned out to be that the percentage of the respondents purchasing the chosen pen was steadily growing while there were less than ten options of pens. After ten options the percentage was dropping and starting from fourteen options was stabilizing (see Figure 1). 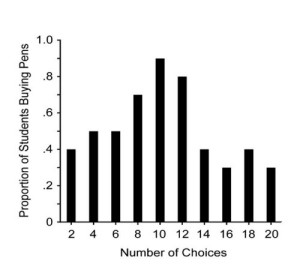 Figure 1. Proportion of subjects who bought any pens as a function of the number of choices available.

It should be noticed that the number of choices had no influence on pens evaluation. This effect is caused by the fact that in any case people gave relative score to the pens comparing them to each other.

Another research conducted by Erasmus University (Rotterdam, Netherlands) describes the potential scheme which might explain this phenomenon [2]. In this work the researchers base upon the classification developed by American psychologist B. Schwartz according to which people use two main strategies of choosing products and therefore form two groups: Satisficers and Maximisers [3].

Maximisers – while choosing the product tend to behave according to classic economy theory, i.e. try to consider all characteristics and make the most successful purchase for a lower price. When Maximiser finally buys the product his/her expectations of its consumers characteristics are very high so it makes quite difficult to get a full satisfaction.

The researchers expected that with the increase of the choice the satisfaction of Maximisers would steadily grow as well as they’d be able to chose a better option while Satisficers would feel worse as it’s difficult to rate a lot of options for people not so involved in the category. However the level of satisfaction decreased for both groups though Maximisers actually demonstrated higher demand for options (see Figure 2). 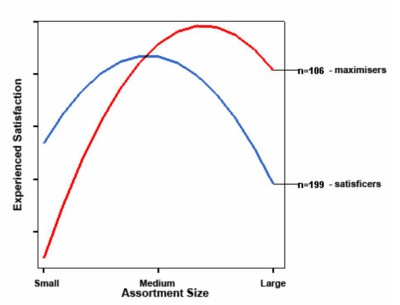 Figure 2. Assortment size on experienced satisfaction for maximisers and satisficers.

What practical conclusions can we make?

1) Wide choice is not always good. Sometimes it’s better to see which part of assortment covers the larger audience in terms of purchase intention.

2) It’s mistaken to think that ten options is an optimal number for any category. Most likely this number varies for different categories.